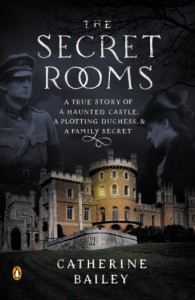 When Catherine Bailey goes to Belvoir Castle in  Leicestershire, it was with the intention of writing a book about the impact of World War I, on the Duke of Rutland's estate. Let into rooms that had been closed, the 9th Duke having died in them, she finds a treasure trove of letters and other historical documents, she also finds a mystery.  Certain time frames have had all letters and documents from all members of the family excised. The mystery of why is too much to ignore and so the focus of her book changes.

It was very interesting following her as she attempts to piece together the why of the missing documents. Loved following her mind as she makes, at first small, and then larger discoveries. The dukes remaining letters create a vivid picture of the lives and morals of the very top of Edwardian society. From a tragic happening in his youth, to his enlistment in World War I, and his marriage we get a clear glimpse of what life was like for this Duke. Speaking of dysfunctional families, this family had it all. His mother the Duchess was a major=r piece of work, and his father not much better. I did understand and excuse certain things about his father, because he was under enormous pressure to keep up appearances and the large family estate together at a time when all fortunes were declining.

The letters detailing his life in the war and the reason he did not go to the front, were very illuminating. From other letters in his possession and the facts uncovered by the author we get a horrifying look at the War, the battle of Ypres, and the major cost of lives on this estate alone. Over two hundred young and older men would die in the war.

IF I have one complaint I think a few of these letters could have been kept out without a detrimental effect on the story, they sometimes just seemed like overkill. All in all though this is a solid look at lives of the last few Dukes of Rutland and the uncovering of a mystery that was 1/2 century in the making. Also loved that the author doesn't just end the book but lets us know the fate of all the leading players. Very solid and interesting historical.