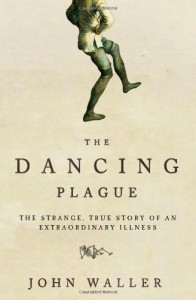 An interesting look at the year 1518, the year a woman began to dance and didn't stop for days. Others joined her and soon many many people were overtaken by this strange plague.

A look back at the ever present threat of starvation due to famine, the corruption of the church who instead of helping their people, took from them. The fire and brimstone preached, the harshness of God and the belief that God was unhappy with them. The darkness of the end of the middle ages, the superstitions ever present are all presented in this book. Therein lies my problem, yes background information was needed to understand the setting that allowed a event such as this to occur. However, I think way to much was presented over and over again, repetitious in some parts. The last three chapters were probably the best, research into the mind and other strange things that have occurred throughout history. The mind is a very powerful instrument indeed.