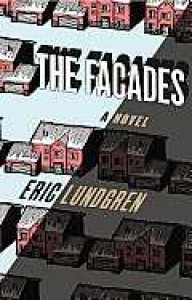 A very hard book to pinpoint or place into any known genre. There is a city called Trude, once known as the Munich of the Midwest, now known as a good place to commit suicide.  A city that has decaying mansions, broken down buildings and an authoritarian mayor bent on destroying the towns library. Its beleaguered starring man is Sven, whose wife Molly has disappeared. He wants only to find her and finds clues everywhere but inside himself.

In a little over two hundred pages this book includes a assisted living center called Traumhaus, where one must apply to be admitted. Where scrabble games are a spectator sport and where a group of residents called "The Pinkies", yes they wear pink bathrobes and slippers, are the envy of the other residents.

There are gun toting librarians in ski masks manning a reference desk that most are afraid to approach.They are called the Trude 13, they sleep in the library, and refuse to leave because the mayor wants to blow up the building. It is important to note that the author works at a public library in St. Louis. Of course everyone thinks the mayor is upset with the library  because he returned a waterlogged romance book (of course it was that way when he checked it out) and had to pay for the book.

Sven and his son are left to themselves, a job Sven is not up to. Of course there is a church ready to step in. What would a decrepit town be without a church preparing themselves for the second coming. Anyway there is so much more and I have to admit I really enjoyed reading this. For a first novel it is very good. The meaning, well that I think will change for each person that reads this. There are many different ways to go. Of course there is always the possibility that one many not find any meaning, but they will have a great time getting there.