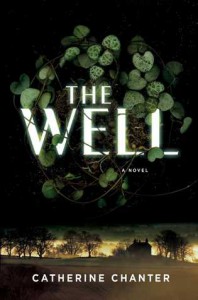 I'm not going to rehash the plot because the description on the book page is a very good one. I'm just going to write what I thought of the book. When I first started this it seemed a bit wordy, though I was interested to see where this was going and of course to find out who really killed Lucien, her five year old grandson. It soon became apparent that this is a character study of Ruth mainly but of others too, how they reacted to the circumstances. How the fact that rain only fell in one place, at the Well, while the rest of the continent seems to be in a drought. Sure brought out the worse in people as Chanter so ably describes.

I soon became immersed in this story, although it was centered in one place there was much happening. Neighbors turn against them, crazies come from all over and finally the Sisters of the Rose, who view Ruth as the chosen one. I found fascinating how Ruth herself, was induced into believing this, soon putting everything on the line. A good view of how people become seduced into a cult, acting against their own best interests.

I ended up really liking this book, it is very well written and the psychological aspects were intriguing. How people act and why, how they behave under untold stress. Did I feel sorry for Ruth? Yes and no, some I think she brought on herself but the penalty was one she didn't expect to pay. Although I did guess the who on the who done it, the ending was still a surprise because there is more than just the unmasking of the killer. All in all, I liked this book, it was different and in the end I felt satisfied with all I read.