the People in the Photo 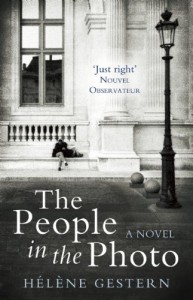 3.5 After her Father's death, Helene is sorting through his papers when she finds a photograph of her mother at a tennis tournament, with two unknown young men. Knowing very little about her mother except that she died in an accident when Helene was four, she places an advert with the photo in the newspapers. She receives a reply from a young biologist in Switzerland who claims one of the men in the photo is his late father.

From there, in a series of letter, e-mails and postcards, Helene and Stéphane attempt to solve the mystery of her mother and the fact that her father would never mention her name, and his father and his depressive, aloof nature.

I enjoyed this easy but poignant read. As they unravel clues, letters and at last journals from a friend of both parents and the letter left from her adopted mother after her death, they at last learn the true story. They also form a personal relationship, but will that survive the knowledge they now have on how their parents were connected? Can they forgive what they learn of their parents actions and can they now move forward?